How To Make A Hopper In Minecraft (And Use It)

In this tutorial, we'll show you how to make a hopper in Minecraft with our detailed instructions below or follow along with our how-to video.

A Minecraft hopper has many uses, including adding items to chests, they can be added to a minecart, and more!

In this video tutorial, we'll show you how to craft a hopper, explain what a hopper does, and teach you how to use a hopper in Minecraft - all in less than a minute and a half!

Items Needed To Make A Hopper

Steps To Make A Minecraft Hopper

To craft a hopper in Minecraft, first, you'll need to open your crafting table. You should see the 3x3 grid like in the image below.

In the crafting table, add the chest and iron ingots.

Keep in mind, that the items must be placed in the crafting grid exactly as shown in the image below. 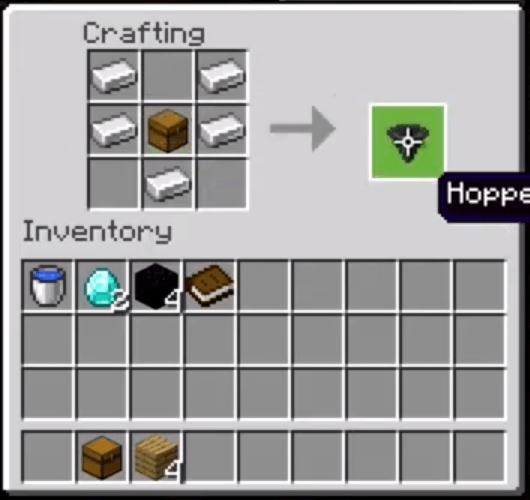 After placing all of the items in the correct order in the crafting grid (as shown above) you'll notice your new hopper appear in the box to the right.

3. Move The Hopper To Your Inventory

Finally, move your new hopper to your item inventory so you can use it. And, that's how you make hoppers! You can use your hopper to add items to chests, you can add it to a minecart, and more! You can also use a Give Command to make a hopper in Minecraft. The hopper command is available in the following editions:

To run the hopper command, open your chat window and enter the command below for your particular console/edition.